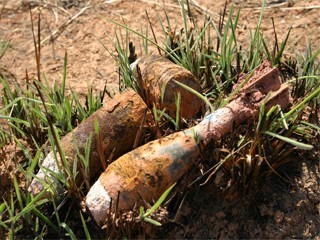 Unexploded Ordnance (UXO) contamination on land is generally the result of historical military activities mostly from WWII. During WWII many UK cities and towns were subjected to significant air raid bombing campaigns; across East London alone more than 200 of the 1,500 bombs dropped failed to detonate*.

Whilst most were dealt with by the Army Bomb Disposal Services during the war, a proportion that did penetrate the ground unnoticed are being encountered many years later.

UXO may also be encountered buried on, or near to former military bases and ammunition factories.  Many of these were never shown on historical maps for reasons of national security so it might not be immediately apparent they used to exist from standard desk based historical research. The return of military land to agriculture can be one way that apparent greenfield development can be affected by UXO.

The legacy of unexploded ordnance has been a hindrance to construction projects around the UK (Article: Why unexploded bombs keep turning up on building sites).  Fortunately, no fatal incidents relating to UXOs have been reported in the UK in recent decades however the Explosive Ordnance Disposal industry shows that from 2006 to 2009 approximately 15,000 items of ordnance were removed from construction sites*. 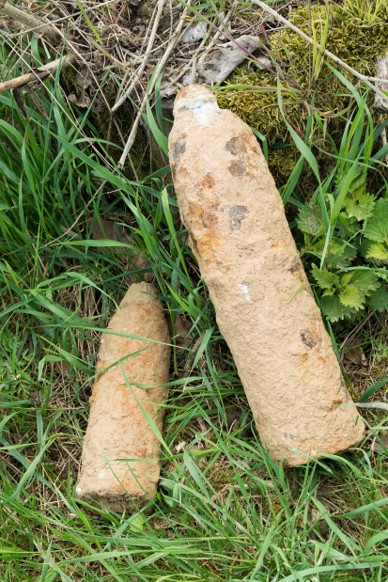 How can UXO risks be managed?

Ground investigation and UXO hazards are managed in a staged process of risk assessment as recommended in CIRIA guidance C681 Unexploded ordnance (UXO): a guide for the construction industry 2009. The process starts with a preliminary risk assessment, leading to detailed assessment and mitigation if necessary to include detection in advance of drilling, piling or excavation.

The preliminary risk assessment (PRA) places a site in context to identify whether more detailed assessment is necessary. The PRA is based upon data obtained from reviews of the site’s history and its proximity to potential indicators for UXO, and for example would be included in a Phase 1 Desktop Study. If indicated to be necessary, detailed risk assessment and mitigation is generally undertaken in association with a specialist UXO sub-contractor.

Delta-Simons Geo-environmental team are currently working on an interesting UXO project.  We are currently on site in a high-to-medium risk area, with UXO specialists undertaking combined pile probing and UXO clearance works at the Site of a proposed high-rise apartment block.

A 20 tonne CPT rig is driving a magnetometer cone into the ground to approximately 10 metres.  The magnetometer cone is capable of detecting magnetic anomalies within a two-metre radius of the probe e.g. possible unexploded bombs.   At the same time the probe is discounting the presence of obstructions e.g. buried concrete etc. which has the capacity to significantly delay piling works.

Upon completion a clearance report is provided to the piling contractor.

So far we have identified one magnetic anomaly, which upon excavation with a UXO specialist watching brief turned out to be a piece of scrap metal approximating the dimensions of a potential bomb within the Made Ground.

The legacy of UXO has continued to cause many problems for construction projects which invariably have led to very expensive delays, especially during the site investigation and groundwork phases of construction.  If you think your site may be compromised by Unexploded Ordnance then talk to one of our team, email: info@deltasimons.com.

Kelvin is a chartered geologist and SiLC, and has 26 years of experience providing client focused solutions to resolve environmental challenges. Kelvin has extensive experience in due diligence and compliance auditing, environmental planning and assessment and redevelopment of land subjected to contaminative use within the property development, manufacturing, chemical, oil and gas and public sectors.