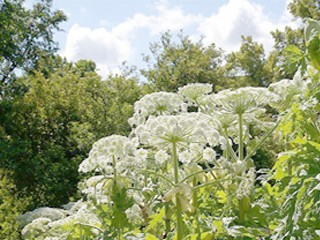 There are many headlines about incidents involving giant hogweed where children were hospitalised after coming into contact with this invasive plant, suffering burns and blistering to the skin.

Giant hogweed can generally be found on river banks, canal towpaths, woodland and heathland after being brought to the UK from Caucasus Mountains in the 19th century. Bizarrely, giant hogweed was introduced as an ornamental plant, and is a member of the carrot family. The invasive plant grows from seed during its first year, then matures and flowers in the second year producing thousands of dry, flat seeds that shed, germinate and further increase the spread of this invasive plant.

What is giant hogweed?

Giant hogweed is phototoxic, especially its sap, which makes the affected skin sensitive to sunlight. This means that when it comes into contact with human skin (phyto-photodermatitis), added with the combination of bright sunshine or ultra violet light, painful blisters and sores can occur. In extreme cases pigmentation and blistering of the skin can last up to six years.

If you come into contact with giant hogweed, wash the affected area thoroughly with soap and cold water immediately and cover up. Try to keep the infected area away from sunlight for 48 hours, but if symptoms worsen then contact a medical professional.

How to identify it

Other disadvantages of giant hogweed

Because of its invasive nature, giant hogweed has been listed as an invasive species on Schedule 9 of the Wildlife and Countryside Act 1981 which makes it an offence to plant or cause giant hogweed to grow in the wild; furthermore, it is an offence for a landowner to let it spread from their own land to someone else's. Whilst under the Environmental Protection Act 1990 the giant hogweed is classified as controlled waste.

Not only can it cause harm to human health, it also has a negative impact on the environment, overshadowing natural plant growth, drawing pollinators, such as bees, away from native plant species and causing accelerated erosion of the land as it is an annual so overwinter after it dies back the land is left bare.

Whilst there is no obligation for landowners to eliminate giant hogweed, the treatment is similar to the eradication of another incredibly invasive plant species, Japanese knotweed. Cutting it down is ineffective, so application of a herbicide treatment with glyphosphate-based chemicals is recommended and applied over two or three years, and additional five years of monitoring to capture viable seeds which may germinate. For more information on our ecological services to support the identification and advice on the removal of invasive plants click here.