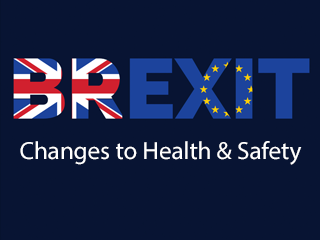 Much has been said and written about Brexit, and this shows no sign of abatement any time soon. A key area of discussion has been the UK’s ability to ‘set our own laws’ and in Health and Safety many of the regulations introduced over the last twenty years originated in the EU.

However, most would still have been implemented in the UK, even without the member state obligation, as they are based on international research and scientific fact. As a result, the majority of H&S legislation which has been driven by the EU is likely to remain, just slightly tweaked.

In early August the government issued the Health and Safety (Amendment) (EU Exit) Regulations 2018, the purpose of which is to ensure that H&S law can still function as originally intended after exit day. The regulations aren’t making radical changes to policy, and it is anticipated that they will have no impact on business and the public sector. However, what the regulations will do is ensure H&S legislation can continue to operate and therefore provide the protection it was designed to provide post Brexit.

These Regulations will affect 1 EU Regulation and 11 sets of UK regulations (i.e. derived from EU Directives). Key changes include:

Regulations 17 and 20(1) require specified information to be made available to other member states where they could be impacted by a major accident.  These will not apply from Brexit day, but the UK will still share information about potential transboundary effects of major accidents, as party to the UNECE Transboundary Effects of Industrial Accidents Convention (TEIA).

Also, regulation 26(3) which requires the Competent Authority to inform the European Commission (EC) about certain major accidents will be removed.  The UK will share information for lessons learned and international best practice purposes using the EC’s database via the TEIA and membership of the Organisation for Economic Co-operation and Development (OECD).

Currently, certain substances and articles are prohibited from being imported from outside the European Economic Area.  Where an exemption to this is required, these are permitted by article 9 of Directive 98/24/EC, which sets out the circumstances for granting exemptions, including the information required.  Under the amendments, the UK Health and Safety Executive (HSE) will permit the exemptions instead.

Regulation 32 currently requires the exchange of knowledge, information and experience between the UK competent authority (HSE) and authorities in other member states and through the European Union Offshore Oil and Gas Authorities Group (EUOAG). The proposed amendments would remove this requirement on the HSE from exit day.

Regulation 22 allows the HSE to grant installations exemption certificates from the regulations’ requirements subject to “any of the provisions imposed by the European Union in respect of the encouragement of improvements in the safety and health of workers at work…”. Under the proposals, the power to issue exemption certificates will only be constrained by provisions imposed by the EU up to exit day.

So, at this stage not much to get excited about. This is evidenced by the lack of a full impact assessment or consultation for the Regulations (neither were deemed necessary as the changes are so minimal and effectively just maintain the status quo). It’s clear that the main driver of the Health & Safety (Amendment) (EU Exit) Regulations 2018 is to ensure that existing protections and regulatory frameworks are maintained and continue to work in the same way once the UK has left the EU. As such, they appear to be about technical ‘tidying up’ rather than significant policy changes and so H&S law as we know it will remain largely unchanged for the foreseeable.